Visit the nation's oldest gardens right here in Virginia! From the most historic Berkeley Plantation to the spectacular displays at Thomas Jefferson's Monticello and George Washington's Mount Vernon, Virginia's gardens are breathtaking and inspiring. 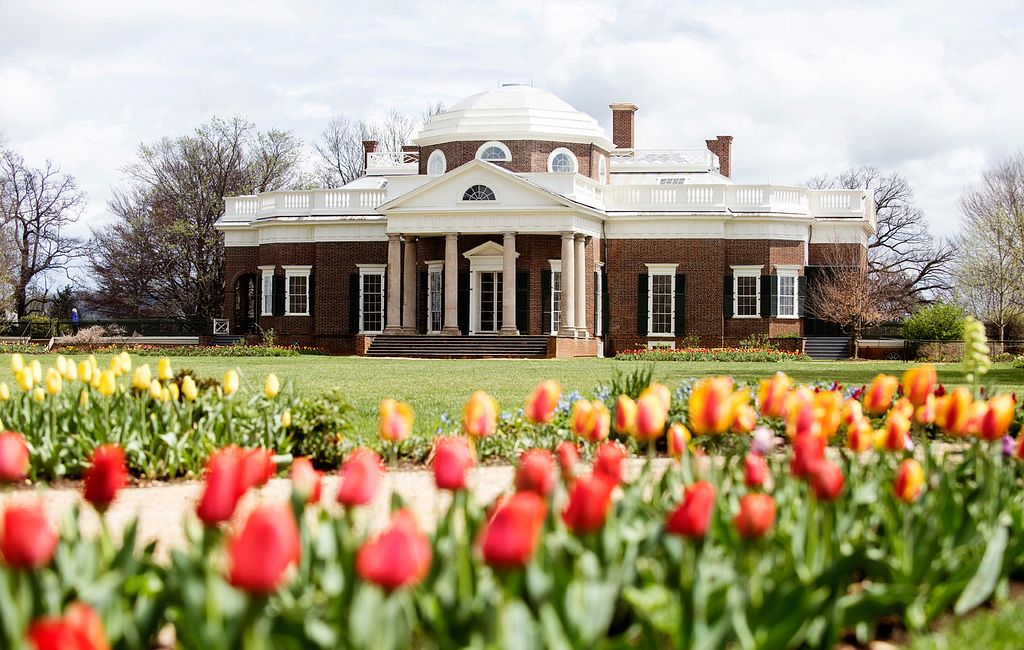 Charlottesville - Highland was the home of James Monroe and features boxwood gardens overlooking a working farm. Many events throughout the year take place here, such as Plantation Days and the Virginia Wine Festival. 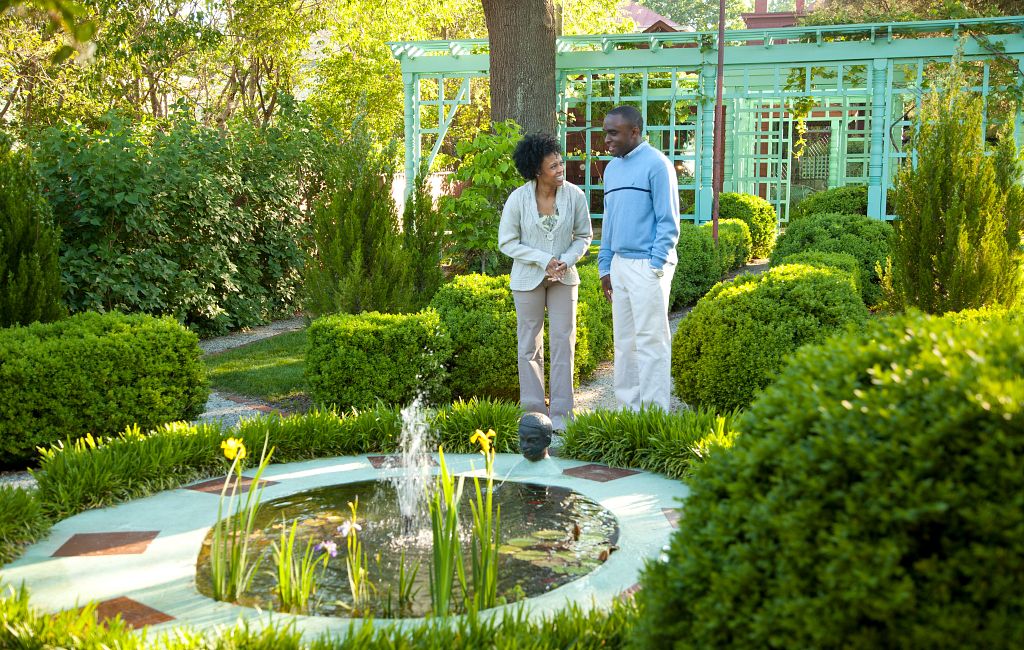 Lynchburg - The Anne Spencer House and Garden was home to the internationally acclaimed poet of the Harlem Renaissance. The garden served as an inspiration for much of her poetry.The garden at the home of Anne Spencer is open, free of charge, every day, dawn to dusk.

Lynchburg - Old City Cemetery features a butterfly garden, lotus pond and a garden of 19th-century shrubs and roses. The gates are open daily, dawn to dusk.

Montpelier Station - Montpelier, home of James and Dolley Madison features a 200-year-old-growth forest as well as a landscape arboretum, beautiful restored formal gardens all overlooking the breathtaking vistas of the Blue Ridge Mountains. Madison described his home as "a squirrel's jump from Heaven." 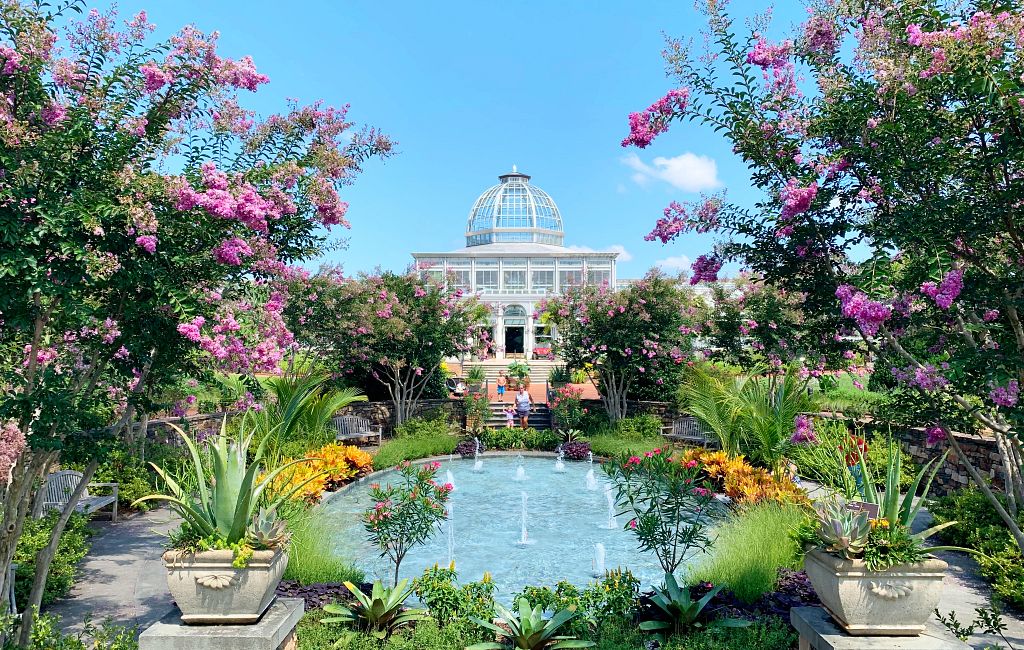 Richmond - Lewis Ginter Botanical Garden features more than 25 acres of gardens, including a children's garden with colorful plants and shrubs to attract butterflies, birds and other nectar.

Richmond - Maymont is a 100-acre Victorian country estate. Visitors can wander the geometrically shaped beds in the Italian Garden and enjoy the relaxing noise from the cascade fountain, designed from a similar feature in the Villa Torlonia near Rome.

Richmond - Not far from Maymont, visitors experience a step further back in time when they visit Agecroft Hall, the Tudor estate that originally stood in Lancashire, England, and re-constructed on the rolling banks of the James River. Agecroft's grounds include the fragrance garden a sunken garden that's modeled after the pond garden at Hampton Court Palace in England.

Richmond - Next door to Agecroft Hall is Virginia House, a reconstructed 12th-century priory also dismantled and brought to Richmond from England in 1925. Terraced gardens overlook the James River. This property was awarded a medallion commendation by the Virginia Chapter of the American Society of Landscape Architects in 2000, one of few properties in Virginia to receive this award. 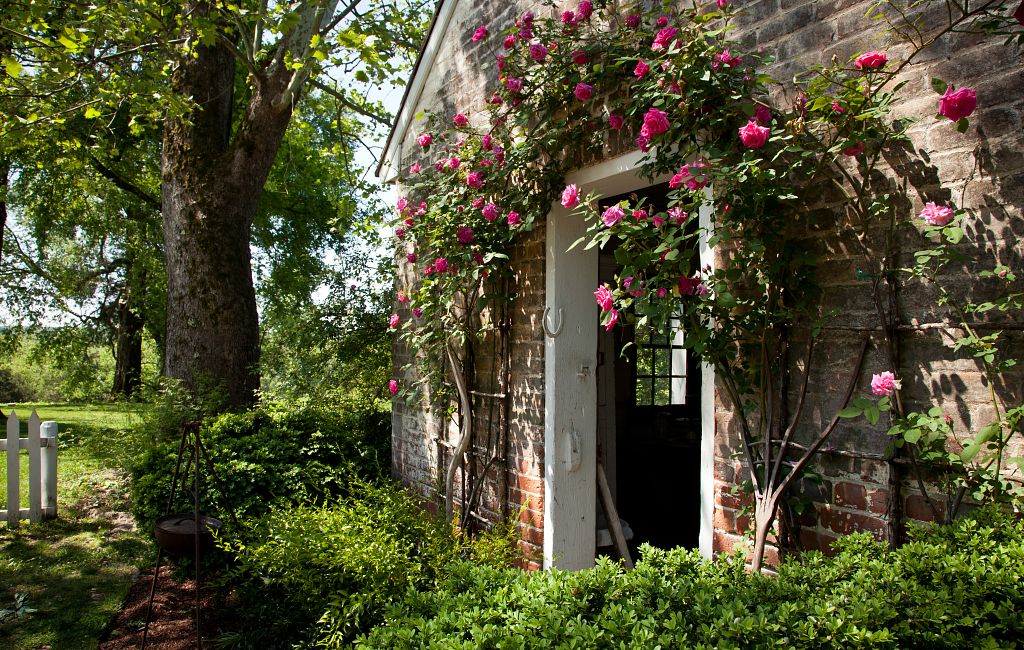 Richmond - Less than ten miles west of Virginia House is Tuckahoe Plantation, the boyhood home of Thomas Jefferson. The rambling gardens are beautiful from March through October and visitors are welcome to peruse them from 9 a.m. to 5 p.m. year 'round. The mansion, however, is only available for tours by appointment and during special events.

Charles City - Berkeley Plantation was the site of the first official Thanksgiving in 1619. Its five hand-dug terraces of restored boxwood and flower gardens overlook farmlands and the James River. 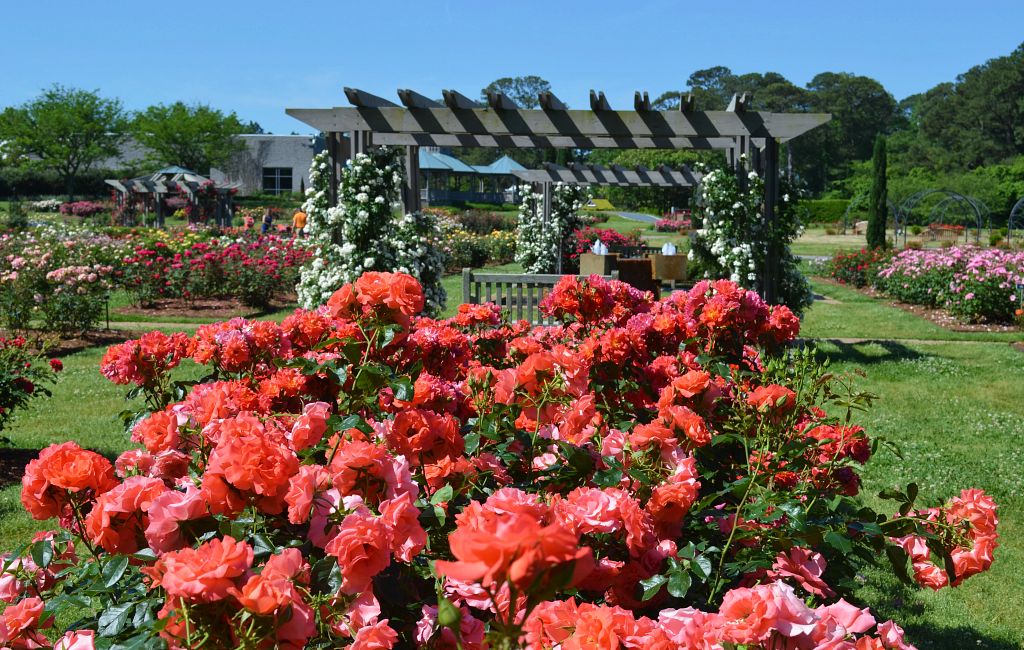 Norfolk - Surrounded by the waters of Lake Whitehurst, Norfolk Botanical Garden covers 155 acres and is the nation's only botanical garden that can be toured by both tram and oat. Visitors discover one of the largest and most diverse collections of azaleas, camellias, roses and rhododendrons on the East Coast. 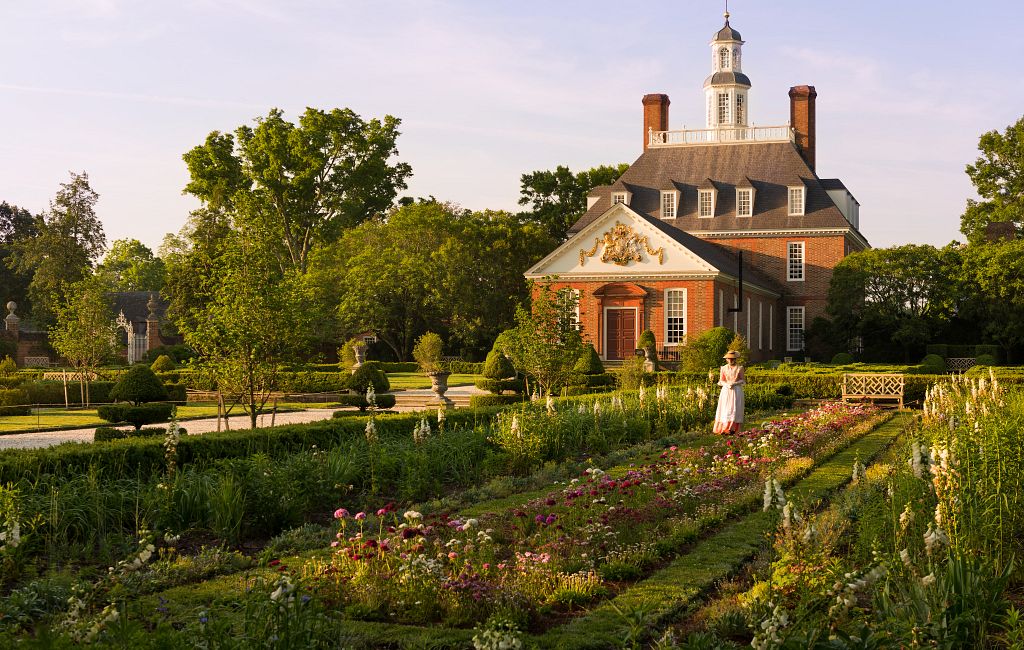 Williamsburg - Colonial Williamsburg offers a labyrinth of 90 gardens spread over 100 acres amid the homes, shops and public buildings of this 18th-century village that is the country's largest outdoor living-history museum. These range from the highly ornamental garden of the Governor's Palace to the utilitarian kitchen and vegetable gardens behind private homes along Duke of Gloucester Street. 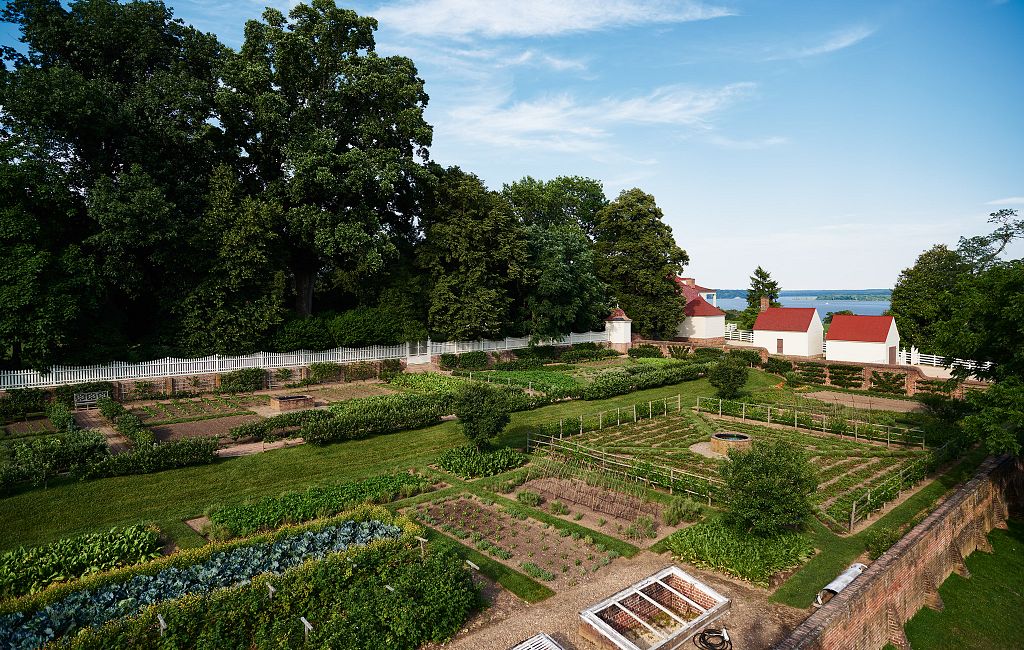 Mount Vernon - Mount Vernon is much more than the home of the nation's first president. Several years ago the name of George Washington's plantation was broadened to "George Washington's Estate and Gardens," to reflect the emphasis on the restored gardens surrounding this beloved icon of American freedom. Washington's love of trees resulted in his planting many around his home 12 of which are still alive today.

Arlington - Potomac Overlook Regional Park is open during the day all year. See vegetable, herb, butterfly and wildflower gardens as you hike the nature trails.

Fredericksburg - Historic Kenmore Plantation & Gardens was built for George Washington's sister, Betty, and her husband, Fielding Lewis. In 1929, The Garden Club of Virginia voted to raise funds to restore the Kenmore gardens; thus began Historic Garden Week in Virginia! It is open daily from March-December.

Fredericksburg - Ferry Farm, the boyhood farm of George Washington, sits on the banks of the Rappahannock River and features recreated colonial-syle gardens. Was this the site where youthful Washington cut down the cherry tree?

Leesburg - Oatlands Plantation features four acres of formal gardens and connecting terraces. Marvel at the 1810 greenhouse, the second oldest of its type in America. 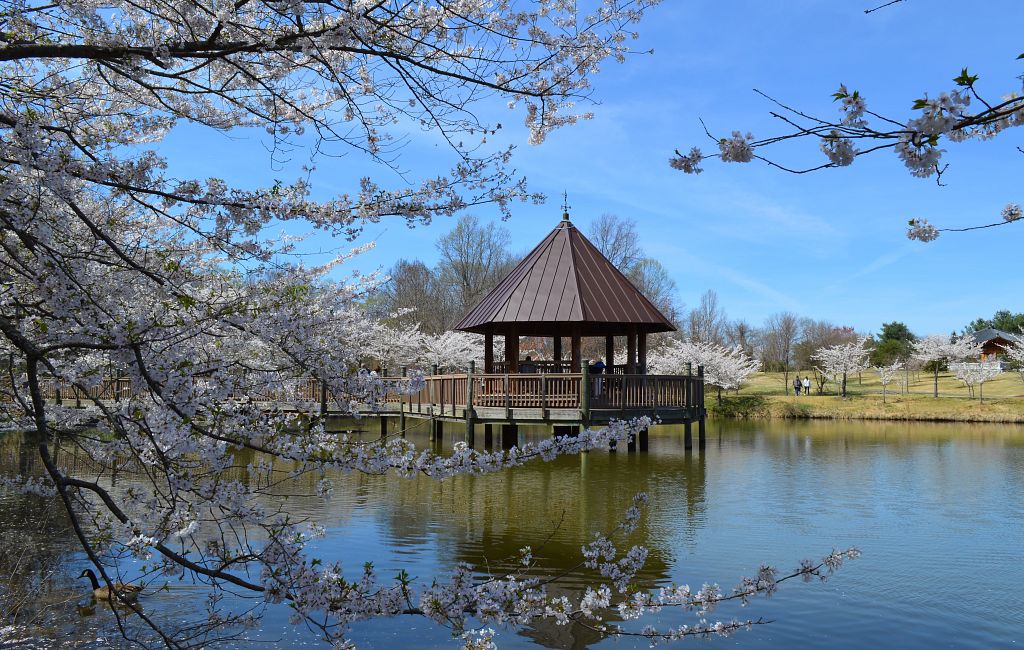 Staunton - Visit the gardens at the Woodrow Wilson Birthplace & Museum, which were designed by the renowned Richmond landscape designer, Charles Gillette in the early 1930s.

Boyce - The 170-acre State Aboretum of Virginia is part of the Blandy Experimental Farm boasts a collection of more than 5,000 wood plants, including the largest variety of boxwood in North America and more than half the world's pine species.

Lexington - Boxerwood Gardens features hundreds of trees and flowering shrubs on 15 acres and is open for self-guided tours March-November.

Wytheville - Stroll through the themed gardens and watch hummingbirds feast on the flowers at Beagle Ridge Herb Farm while sipping a cup of tea on the patio.